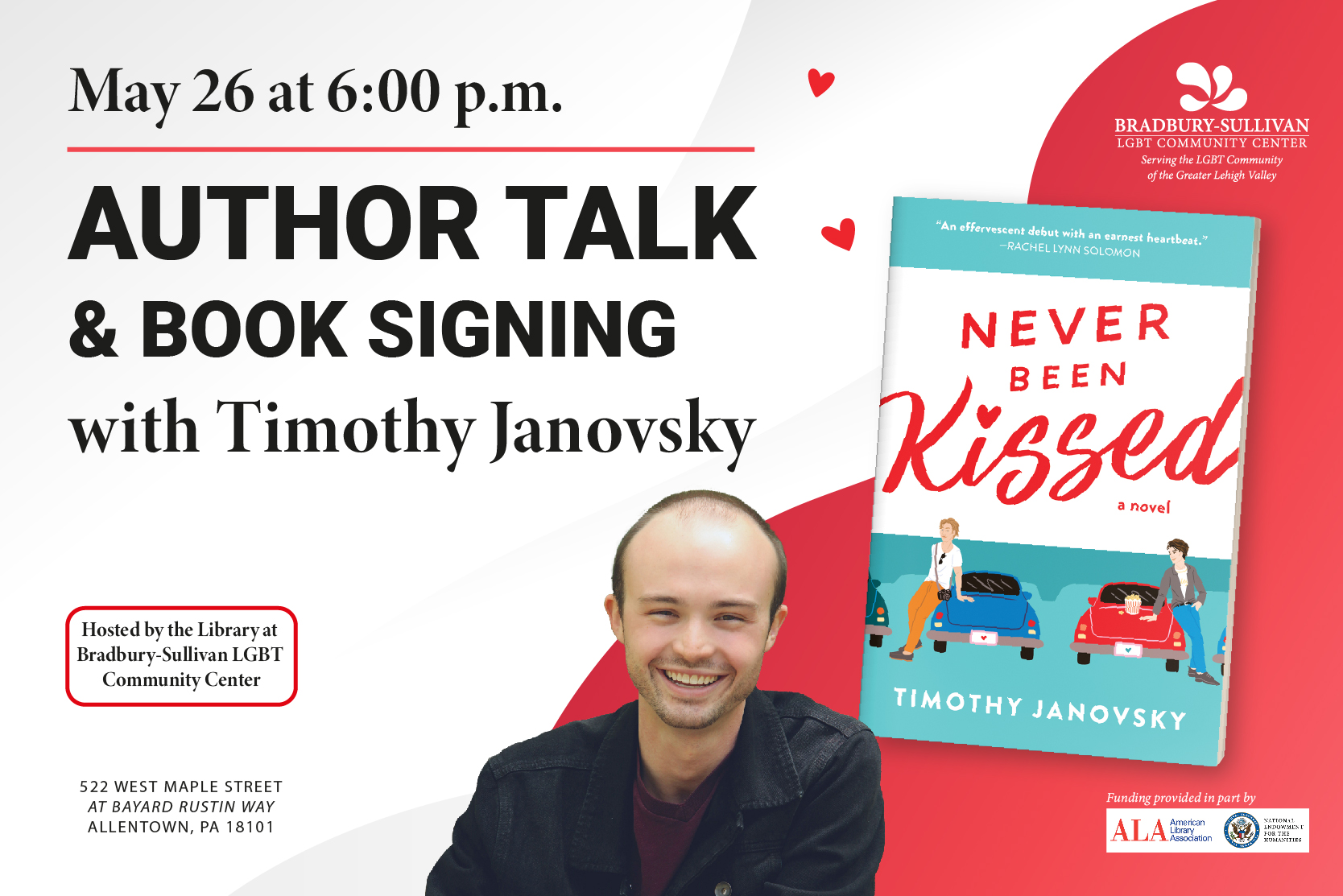 [Image description: A rectangular graphic with a white and red background and red hearts. In the middle is a white man with short brown hair, wearing a dark collared shirt. On the right is a colorful book cover with the title "Never Been Kissed" and the author's name "Timothy Janovsky". On the cover are two people leaning up against blue and red cars. Black text on the graphic reads "May 26 at 6:00 p.m." and "Author Talk & Book Signing with Timothy Janovsky". A rounded rectangle with a red outline has white text that reads "Hosted by the Library at Bradbury-Sullivan LGBT Community Center", and white text below reads "522 West Maple Street at Bayard Rustin Way, Allentown, PA 18101". The Bradbury-Sullivan LGBT Community Center logo is to the right in white. Logos for the American Library Association and National Endowment for the Humanities are also featured.]

The Library at Bradbury-Sullivan LGBT Community Center presents an author talk and book signing with Timothy Janovsky, author of Never Been Kissed.

Wren Roland has never been kissed, but he wants that movie-perfect ending more than anything. Feeling nostalgic on the eve of his birthday, he sends emails to all the boys he (ahem) loved before he came out. Morning brings the inevitable "Oh, God, what did I do?," but he brushes that panic aside. Why stress about it? None of his could-have-beens are actually going to read the emails, much less respond. Right?

Enter Derick Haverford, Wren's #1 pre-coming-out-crush and his drive-in theater's new social media intern. Everyone claims he's coasting on cinematic good looks and his father's connections, but Wren has always known there's much more to Derick than meets the eye. Too bad he doesn't feel the same way about the infamous almost-kiss that once rocked Wren's world.

Whatever. Wren's no longer a closeted teenager; he can survive this. But as their hazy summer becomes consumed with a special project that may just save the struggling drive-in for good, Wren and Derick are drawn ever-closer...and maybe, finally, Wren's dream of a perfect-kiss-before-the-credits is within reach.

Timothy Janovsky is a queer, multidisciplinary storyteller from New Jersey. He holds a bachelor's degree from Muhlenberg College and a self-appointed certificate in rom-com studies (accreditation pending). When he's not daydreaming about young Hugh Grant, he's telling jokes, playing characters, and writing books. He's the author of "Never Been Kissed" and "You're a Mean One, Matthew Prince." Follow him on social media for more.

This is a sober-social event at Bradbury-Sullivan LGBT Community Center. Alcohol will not be present.