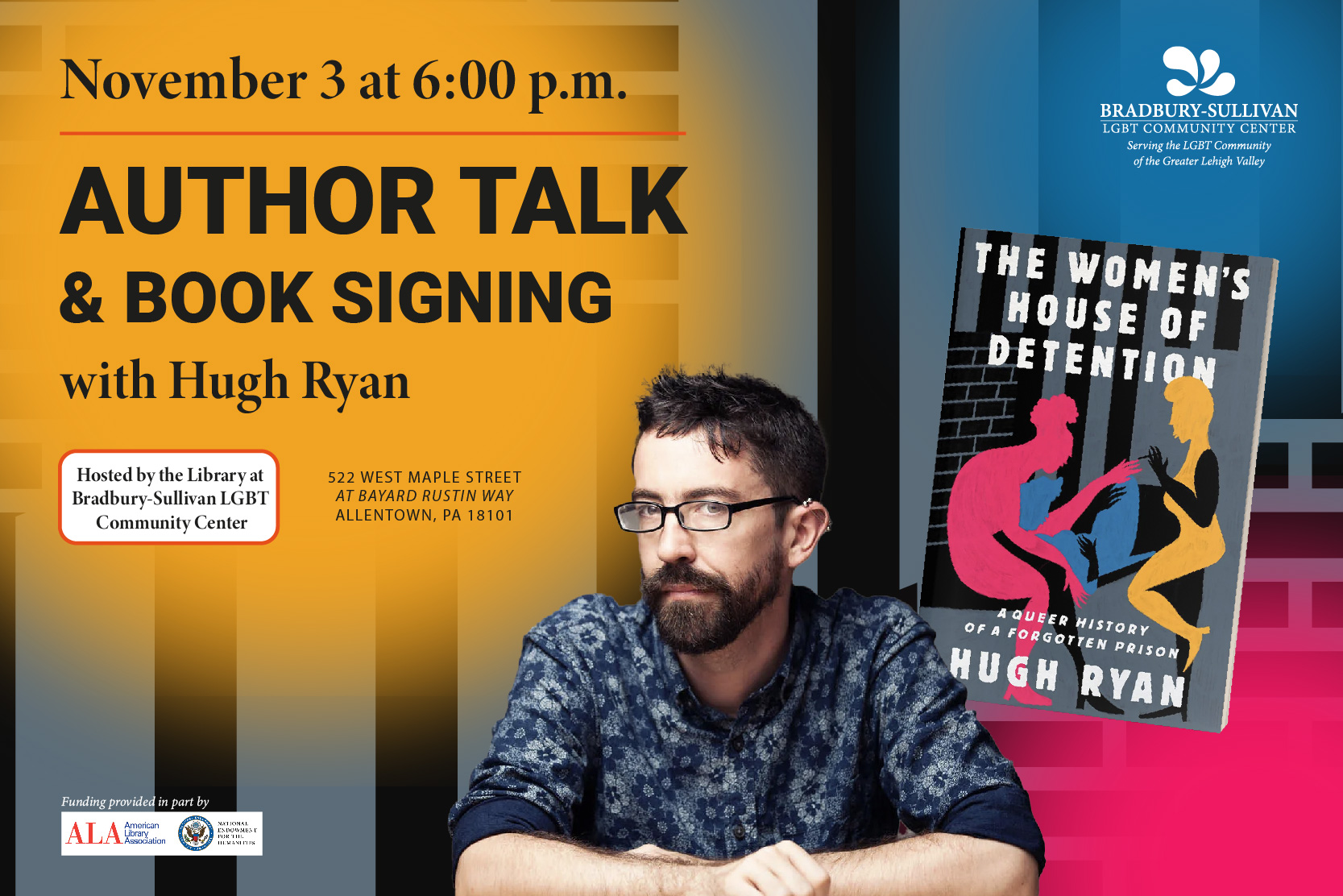 [Image description: A rectangular graphic with a blurry orange background that has brick wall patterns in black and gray. Centered on the graphic is a photograph of a bearded white man with short brown hair, wearing a patterned blue shirt and glasses. On the right is a book cover. White text on the cover reads “The Women’s House of Detention”, “A Queer History of a Forgotten Prison.”, and “Hugh Ryan.” Black text in the upper left corner of the graphic reads "November at 6:00 p.m.", "Author Talk & Book Signing with Hugh Ryan.” A rounded rectangle with a red outline has black text that reads "Hosted by the Library at Bradbury-Sullivan LGBT Community Center". The center’s address is to the right in black. The Bradbury-Sullivan LGBT Community Center logo is in the upper right corner in white.]

The Library at Bradbury-Sullivan LGBT Community Center is excited to host an author talk with Hugh Ryan, the author of The Women's House of Detention on November 3rd at 6pm.

This singular history of a prison, and the queer women and trans people held there, is a window into the policing of queerness and radical politics in the twentieth century.

The Women’s House of Detention, a landmark that ushered in the modern era of women’s imprisonment, is now largely forgotten. But when it stood in New York City’s Greenwich Village, from 1929 to 1974, it was a nexus for the tens of thousands of women, transgender men, and gender-nonconforming people who inhabited its crowded cells. Some of these inmates—Angela Davis, Andrea Dworkin, Afeni Shakur—were famous, but the vast majority were incarcerated for the crimes of being poor and improperly feminine. Today, approximately 40 percent of the people in women’s prisons identify as queer; in earlier decades, that percentage was almost certainly higher.

Historian Hugh Ryan explores the roots of this crisis and reconstructs the little-known lives of incarcerated New Yorkers, making a uniquely queer case for prison abolition—and demonstrating that by queering the Village, the House of D helped defined queerness for the rest of America. From the lesbian communities forged through the Women’s House of Detention to the turbulent prison riots that presaged Stonewall, this is the story of one building and much more: the people it caged, the neighborhood it changed, and the resistance it inspired.

We encourage you to join us to have a meaningful conversation facilitated by Hugh Ryan so we can learn more about the history of our community and the systems that have wronged us.

For more information about this event or to RSVP, please email [email protected].