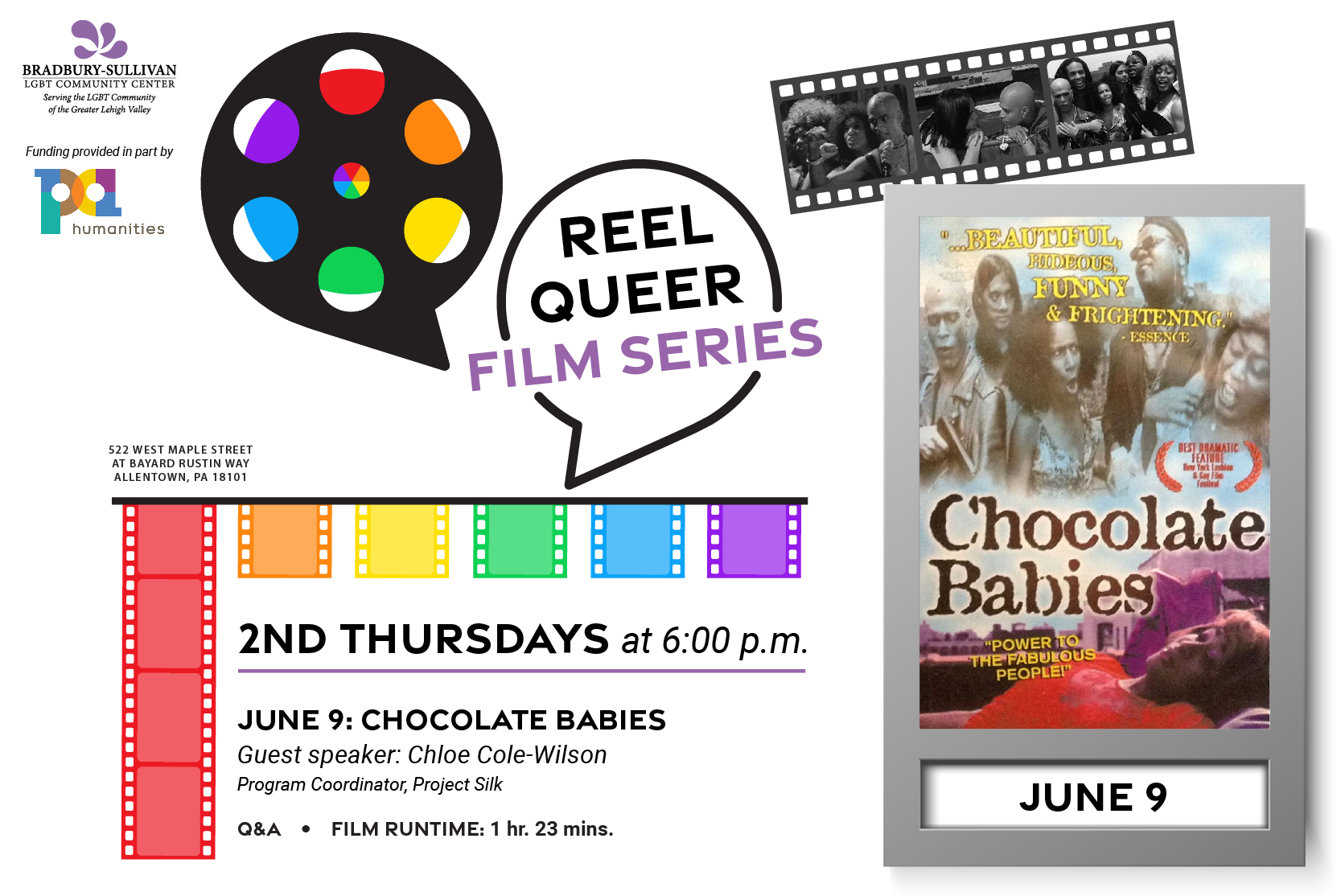 [Image description: A rectangular graphic with a white background. The Bradbury-Sullivan LGBT Community Center logo is in the upper left corner. Below are two speech bubble icons. The left one is black with rainbow details fashioned to look like a film reel. The right one has a black border with black and purple that reads "Reel Queer Film Series." A film cover is to the right. The title "Chocolate Babies" is in the center of the image in brown text. Above the film cover is a film strip featuring three snapshots from the film. Underneath the speech bubble icons are rainbow film strips of various lengths and event details. Black text reads "2nd Thursdays at 6:00 p.m.," "June 9: Chocolate Babies" "Guest speaker: Chole Cole-Wilson, Project Coordinator, Project Silk" "Q&A," and "Film runtime: 1 hr. 23 mins"]

Join us June 9th for our featured film Chocolate Babies! We will watch the film together with our special guest, Chloe Cole-Wilson, and then have a talk back session after watching the film for about 15 minutes. The goal of this series is to have in depth conversations about the many intersections of our community while also creating a space to casually meet others in the community. If you love to learn and have good conversation, this is the event for you! These are every second Thursday of the month so please tune in for the next one in July!

Occupying the space between fantasy, tragedy, and comedy, the award winning Chocolate Babies is a roller-coaster ride that has been provoking laughter and dialogue since its 1997 premiere.

An underground band of HIV-positive, queer, urban, genderqueer, activists of color is making headlines in New York City. In an effort to expose political corruption surrounding the AIDS epidemic, these urban guerrillas stage a series of surprise attacks against conservative politicians whom they believe are collecting secret lists of HIV-positive individuals. The masterminds behind the action include “to-the-death!” diva Max Mo-Freak; his determined sister, Jamela; Larva, sex-crazed with an attitude; Lady Marmalade, a junkie songstress; and Sam, an idealistic young militant (and Max Mo's lover) .Caught up in their extreme methods of activism and self-destructive drug and alcohol binges, the group becomes torn by infighting and begins to lose sight of their mission and loyalty to each other. Will they find the peace and justice they seek?

Funding has been provided in part by PA Humanities and the National Endowment for the Humanities as part of the American Rescue Plan Act of 2021.
WHEN
June 09, 2022 at 6:00pm - 8pm
WHERE
Bradbury-Sullivan LGBT Community Center
522 W Maple St
at Bayard Rustin Way
Allentown, PA 18101
United States
Google map and directions
CONTACT
Gabby Hochfeld · · (610) 347-9988 x 200