Queer Movie Night: To Be Takei 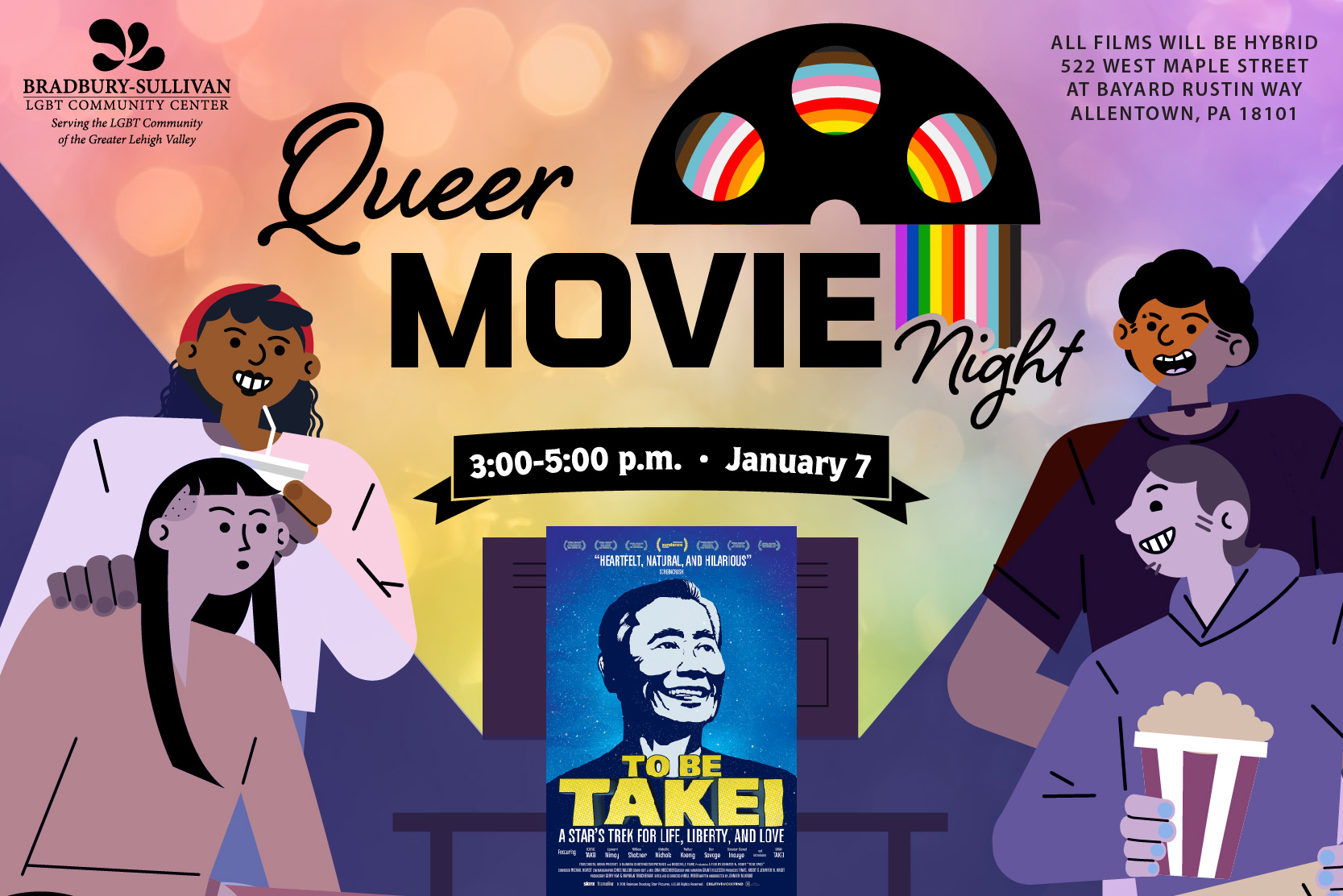 [Image description: A graphic that features animations of four people watching a movie. Text in the upper portion reads "Queer Movie Night" to the right is the upper portion of a film reel with an intersectional-Pride rainbow running through it. Text below reads "3 to 5 p.m." and "January 7." Centered in the lower portion is the film cover for "To Be Takei." The BSC logo is in the upper left corner, address is in the upper right.]

Queer Movie Night at Bradbury-Sullivan LGBT Community Center presents free screenings of LGBTQ-themed films! Talkbacks follow each screening. All of the films we screen are not rated higher than PG-13 unless specified otherwise.

This award-winning documentary features Star Trek legend, marriage equality advocate, and spokesperson for racial justice; superstar George Takei. Best known for his groundbreaking role of Hikaru Sulu on a certain epic starship and its multi-ethnic crew, Takei is one of the most visible Asian-American actors of all time, inspiring generations of fans. Following his Star Trek run, George’s baritone voice later earned him work in animated series like The Simpsons, Futurama, and The Super Hero Squad Show. These days, from signings at New York City’s Midtown Comics to ComiCon!, George’s husband, business manager, and co-pilot, Brad, excels at keeping George (and his hordes of fans) organized.

But Takei’s true legacy may be his off-screen advocacy. When Takei was just a boy, his family was uprooted from their home in Los Angeles and forced into internment camps as part of the mid-20th century U.S. government efforts to subjugate Japanese American citizens based solely on their ethnic heritage. A true elder statesman with a wry sense of humor, his awesome Facebook presence—initiated to help promote his Broadway-bound musical Allegiance, inspired by his life in the internment camps—provides a daily dose of wisdom and wit. At a time when alarming rhetoric about Islamic and Latino Americans dominates the landscape, there is perhaps no better spokesperson for the historical legacy of fear and xenophobia in the U.S. than George Takei. George, and husband Brad, have also been unflappable spokespeople for LGBTQ+ rights.

The film features unparalleled behind-the-scenes intimacy with the dynamic duo George and Brad, as well as interviews with famous friends from William Shatner to Howard Stern. The ultimate result is the ultimate examination of the vastness of what it means To Be Takei.