If you've got it, Pap it 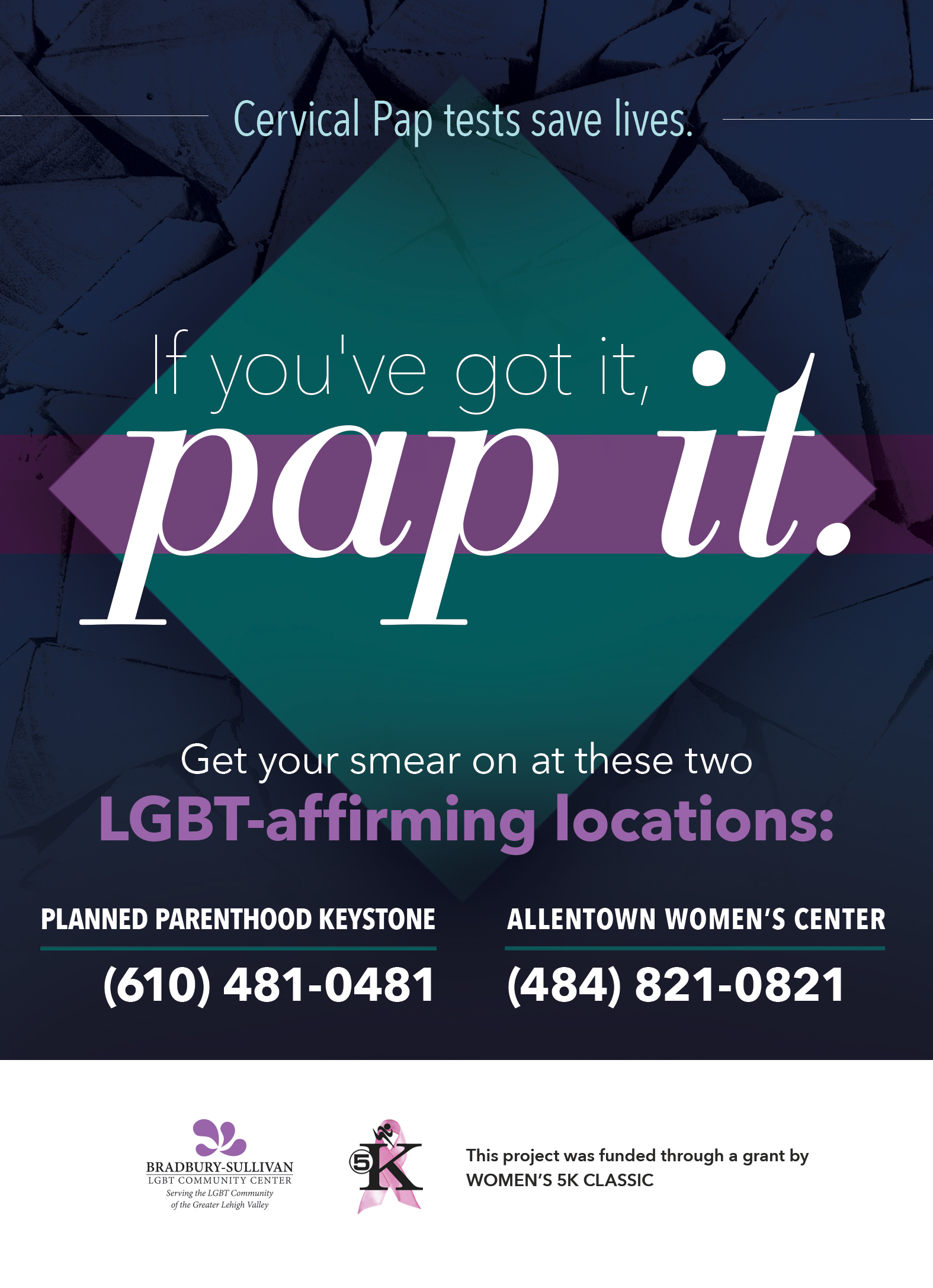 Get your smear on at an LGBT-welcoming gynecologist’s office

If you've got it, Pap it! is Bradbury-Sullivan LGBT Community Center's campaign to increase cervical cancer screening rates in the Lehigh Valley.

Screening is offered locally at:

According to the American Cancer Society, lesbian and bisexual women get less routine cancer screenings than the majority population. For transgender or non-binary people assigned female at birth but who do not identify as women, there are frequently fears of healthcare discrimination as well as disassociation with gynecologic body parts. What's more, the LGBT community as a whole engages in higher risk-behaviors as a result of social and cultural experiences with discrimination, familial homophobia and/or transphobia, and minority stress. The World Health Organization notes that cervical cancer is the most commonly contracted HIV-related disease and identifies several risk factors for cervical cancer, including HPV. HPV is widely understood to be sexually transmitted through skin-to-skin contact (with or without condom usage). The CDC recommends cervical Pap tests for people with cervixes every 3-5 years depending on age and symptomatic/asymptomatic results.

THE BARRIERS TO CARE

There are numerous barriers in place. One in four LGBT people in the Pennsylvania report having had a negative past experience from a healthcare professional and one in ten fear going to a health care professional as a result. With regard to cervical Pap tests, lesbians have reported being repeatedly asked about why they aren't on birth control, and the 'pinking' of gynecologic cancers is a barrier to care throughout the LGBT community. Additionally, waiting rooms are often not reflective or representational of the LGBT patient population. For transgender men, barriers to cervical Pap tests are compounded with providers that lack cultural humility and medical competency regarding gynecologic care for the transgender patient population. Further, there is a knowledge gap within the LGBT community regarding how HPV cancers are spread and regarding the importance of routine cancer screenings.

If you've got it, Pap it! is an evidenced-based campaign to increase cervical Pap testing among LGBT people assigned female at birth in the Lehigh Valley.

If you've got it, Pap it! was funded through a grant from Women's 5K Classic.

Developed resources reported in this project are supported by the National Network of Libraries of Medicine (NNLM), National Institutes of Health (NIH) under cooperative agreement number UG4LM012342 with the University of Pittsburgh, Health Sciences Library System. The content is solely the responsibility of the authors and does not necessarily represent the official views of the National Institutes of Health.

PLEASE NOTE: Your use of information contained on this and all other pages of this website is subject to the terms and conditions more fully set forth in our Disclaimer.