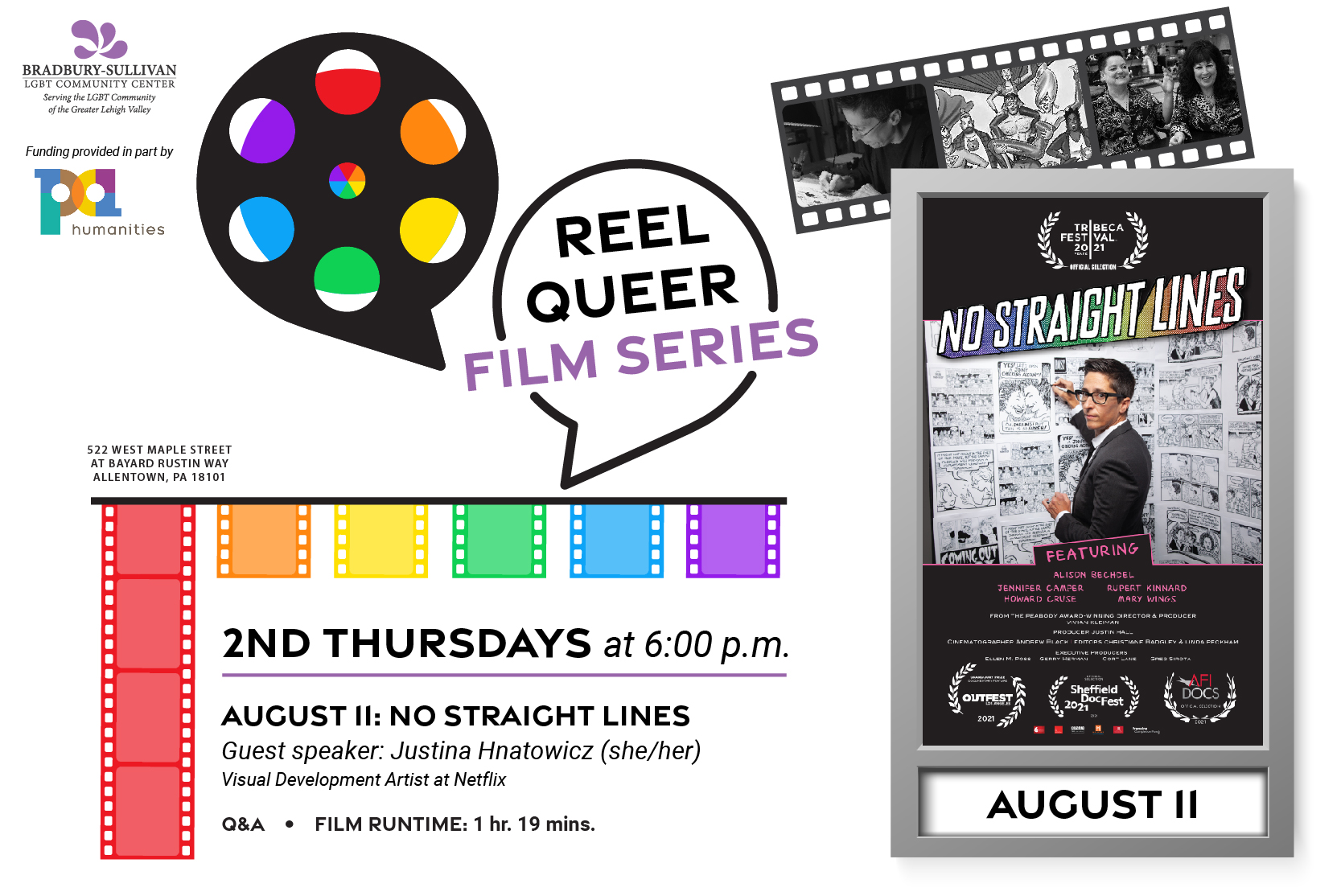 [Image description: A rectangular graphic with a white background. The Bradbury-Sullivan LGBT Community Center logo is in the upper left corner. Below are two speech bubble icons. The left one is black with rainbow details fashioned to look like a film reel. The right one has a black border with black and purple that reads "Reel Queer Film Series." A film cover is to the right. The title "No Straight Lines" is in the upper portion of the image in white with rainbow accents. The left side of the graphic has a film strip featuring three snapshots from the film. Underneath the speech bubble icons are rainbow film strips of various lengths. Black text below reads "2nd Thursdays at 6:00 p.m.", "August 11: No Straight Lines", "Guest speaker: Justina Hnatowicz (she/her)”, and “Visual Development Artist at Netflix.” The logo for PA Humanities is in the lower left corner.]

The film screenings are held in person and virtually on the 2nd Thursdays at 6 p.m. Join us August 11th at 6pm to watch and discuss No Straight Lines with guest speaker Justina Hnatowicz (she/her) who is a Visual Development Artist at Netflix.

No Straight Lines tells the story of five scrappy and pioneering cartoonists who depicted everything from the AIDS crisis, coming out, and same-sex marriage, to themes of race, gender, and disability. They tackled the humor in queer lives in a changing world, and the everyday pursuits of love, sex, and community. Their work is funny, smart, and profound, and provides a unique, uncensored window into LGBTQ lives from the 1970s onward, beginning at a time in which there was no other genuine queer storytelling in popular culture. Equally engaging are their personal journeys, as they, against all odds, helped build a queer comics underground that has been able to grow and evolve in remarkable ways.

Funding has been provided in part by PA Humanities and the National Endowment for the Humanities as part of the American Rescue Plan Act of 2021.
WHEN
August 11, 2022 at 6:00pm - 8pm
WHERE
Bradbury-Sullivan LGBT Community Center
522 W Maple St
at Bayard Rustin Way
Allentown, PA 18101
United States
Google map and directions
CONTACT
Gabby Hochfeld · · (610) 347-9988 x 200