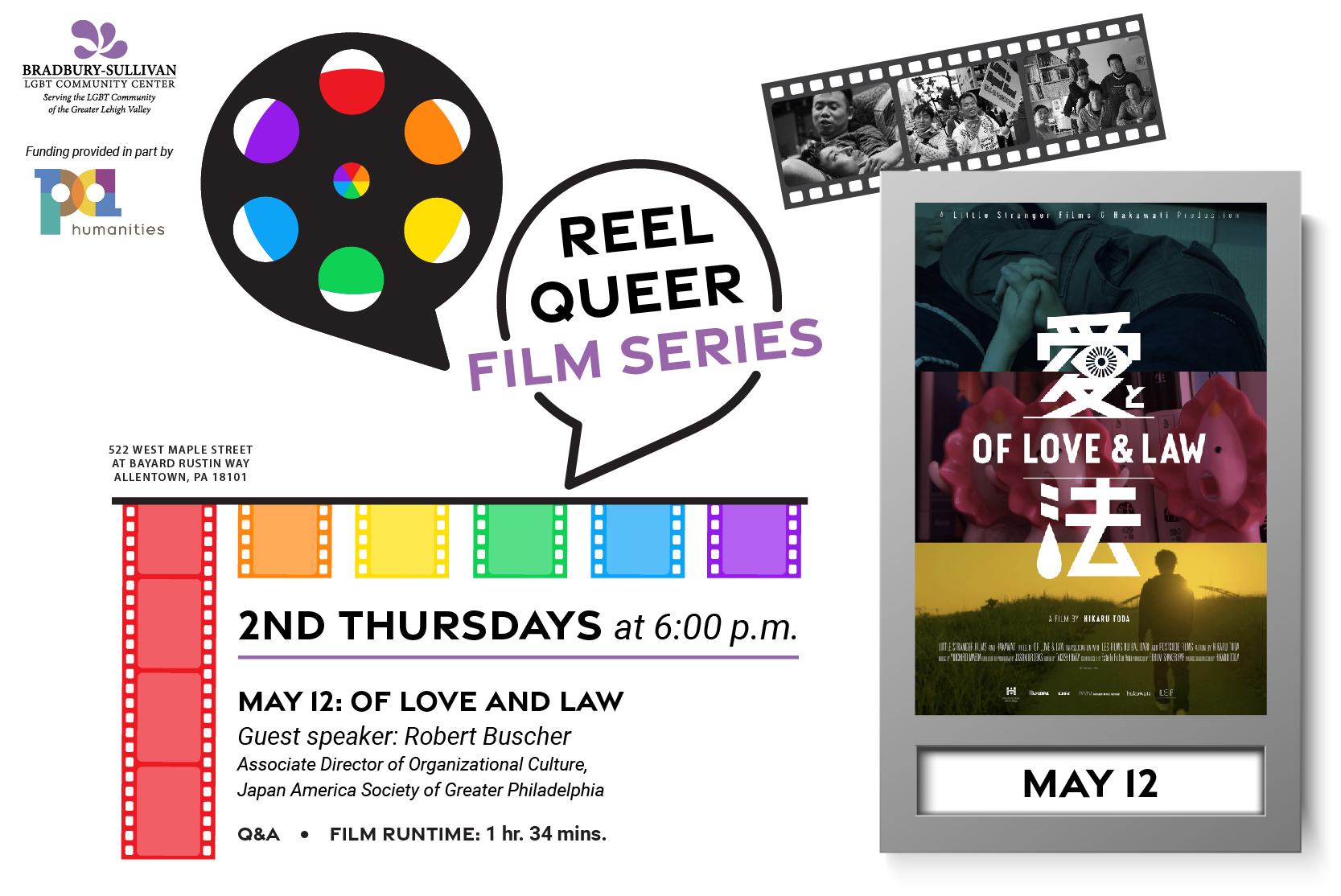 [Image description: A rectangular graphic with a white background. The Bradbury-Sullivan LGBT Community Center logo is in the upper left corner. Below are two speech bubble icons. The left one is black with rainbow details fashioned to look like a film reel. The right one has a black border with black and purple that reads "Reel Queer Film Series." A film cover is to the right. The title "Of Love & Law" is in the center of the image in white text. Above the film cover is a film strip featuring three snapshots from the film. Underneath the speech bubble icons are rainbow film strips of various lengths and event details. Black text reads "2nd Thursdays at 6:00 p.m.," "May 12: OF LOVE AND LAW," "Guest speaker: Robert Buscher, Associate Director of Organizational Culture, Japan America Society of Greater Philadelphia" "Q&A," and "Film runtime: 1 hr. 34 mins"]

Join us May 12 for our featured film Of Love and Law! We will watch the film together with our special guest, Robert Buscher, and then have a talk back session after watching the film for about 15 minutes. The goal of this series is to have in depth conversations about the many intersections of our community while also creating a space to casually meet others in the community. If you love to learn and have good conversation, this is the event for you! These are every second Thursday of the month so please tune in for the next one in June!

Of Love and Law follows the two lawyers as they enter into the lives of their clients, each revealing the challenges of being an individual who is made invisible or silenced by a deeply conformist society for simply being different. We meet Rokudenashiko, an artist arrested for breaking the obscenity law with her vagina-themed art works; Ms. Tsujitani dismissed from her teaching position for not singing the national anthem at a graduation ceremony; anonymous individuals who have no official legal status in Japan for being born outside of the traditional family structure. These cases pose universal questions around the freedom of expression and what it means to be legally recognized by your nation, which draw parallels to experiences in the US and beyond.